Count 8 -  The Governor and State Legislators are knowingly and intentionally denying students in the Capistrano Unified School District of adequate funding to retain highly qualified staff, to restore programs and services, to have reasonable class sizes, to fix and maintain facilities, to purchase Common Core mandated computers and technology, to build new schools, and add additional classrooms to many impacted school sites. The Governor and State Legislators have failed and refused to act in accordance with Article XVI, §8 of the California Constitution, and as a result have denied every student in the Capistrano Unified School District their Constitutional right to an equal opportunity to achieve a quality education. The continued lack of adequate funding has resulted in a continued decline in academic performance across all demographics.

1.     The State of California has a Constitutional mandate to provide every student with an equal opportunity to achieve a quality education. While the courts have been reluctant to define what "adequate" funding is, the Court's will have little trouble defining what "inadequate" funding is based on the allegations in this complaint.

2.     The level of funding that the Capistrano Unified School District receives is insufficient to provide the basic requirements for a quality education as defined by the courts.

During the economic recession, CUSD was forced to cut $152 million from its annual budget (a 32% reduction in annual revenues).

CUTS TO CUSD STAFF AND PROGRAMS SINCE 2006

Program and Service Reductions: Eliminated or reduced many programs to utilize categorical flexibility including:

*Note: The District uses a "MULTI-PRONGED APPROACH" to balance its budget. In 2012-13 Proposed Budget cuts were based on the passage or failure of Prop 30. If Prop 30 passed CUSD would need to cut $30 million from it's 2012-13 budget. If Prop 30 failed CUSD would need to cut $51 million from its 2012-13 budget. This approach assumes that cuts start with unilateral cuts to non-negotiated items and then only looks to negotiated cuts from employee groups if needed. This is a fundamentally flawed approach to addressing CUSD's budget shortfalls. Everything, ("unilateral reductions" and "negotiated concessions") should be on the table together. To force unilateral cuts first then back into negotiated concessions as a last resort, has resulted in a disproportionate amount of cuts to core education programs while shielding the 90+% of the budget that goes to employee compensation from the bulk of cuts CUSD has faced since 2006. This can be illustrated by looking at the FY 2012- 2013 Collective Bargaining Agreements and the corresponding FY 2012-2013 Budget that was adopted June 27, 2012. To preserve employee salaries, Students had 8 furlough days, class size increases of 1.5 students across all grades, deferred maintenance, and $ 5.5 million in program reductions.

Other area of savings: $1.4 million

* When Prop 30 passed CUSD only needed to implement $30 million of the $51 million in identified cuts. CUSD chose not to implement the $19.8 million in identified Salary Rollbacks- preserving employee salaries. This was not disclosed to parents and the public. The District represented to parents and the public that the District balanced it's budget with $51 million in employee concessions. The reality is that the budget was balanced on the backs of students in order to shield employees from a 1% salary rollback.

With the passage of the State's New LCFF, the District received $8.42 million in new funding. However, because there was no LCAP in place to ensure accountability; CUSD passed a FY 2013- 2014 budget without having any employment contracts in place (over 92% of the budget). Execution of CUSD’s 2013-2014 employment contracts were intentionally delayed so that new LCFF money could be added to revenues so that the COLA + "New" LCFF moneys could be combined to trigger $5.622 million in salary restorations from the 2010 teachers strike. By illegally delaying contract negotiations CUSD paid employees $5.622 million in salary restorations then started the process of identifying $13,381 in budget cuts for FY 2013-2014.

School Districts across the State went to extraordinary lengths to get Prop 30 passed in order to "save" schools and California's Public Education System. Every educational institution in the State actively; and illegally, "advocated" for the passage of Prop 30 while remaining virtually silent on a competing education funding initiative Proposition 38 Tax To fund Education and Early Childhood Programs Initiative Statute 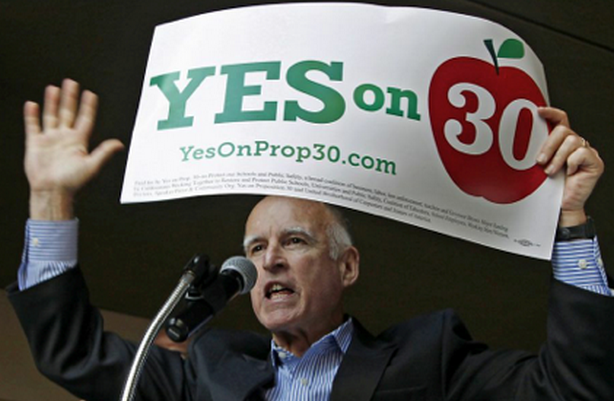 Students did not benefit from the passage of Prop 30 as promised. This was a concerted effort on the part of California public employee unions working in conjunction with Defendants Governor Brown and the California State Legislature to raise tax revenues for the sole purpose of backfilling the unfunded pensions of government employees. Prop 30 had nothing to do with the State wanting to improve quality educational opportunities for students.

4.     The State of California has a Constitutional mandate to provide a free and equal education to EVERY student in California; irrespective of an individual students wealth, race or ethnicity. When the State of California, fails to provide adequate funding to a school district it means the District is continually faced with budget decisions that pit what is in the best interest of educating students against what is in the economic interests of employees. The result is a lack of transparency and corruption within the District that results in so little funding going to anything except employee compensation that students are deprived of the educational resources they need to achieve even a minimum education and are denied the ability to fulfill their academic potential. Students in CUSD are not being given the funding that is necessary to provide them with an opportunity they need to achieve a quality education like their peers in Basic Aid Districts, or Districts with higher percentages of students who are English Language Learners, Receiving Free and Reduced Lunch or are in Foster Care. Such deprivation of their fundamental right to education is a violation of the Equal Protection Clause of the 14th Amendment to the United States Constitution and Article 1 Section 7 and Article 4 section 16 commonly referred to as the equal protection laws of California.

Plaintiff incorporates the LCAP Data and historical testing data into this complaint to show that a continued lack of adequate funding has resulted in a notable decline in the academic performance of CUSD students across all grade levels and all demographics as evidenced by CUSD's LCAP and historical data. See: CUSD Local Control Accountability Plan incorporated into this complaint

5.     The California economy is experiencing the longest economic recovery in the State’s history; yet the State’s new education funding law (Local Control Funding Formula) is limiting K-12 education funding to 2007 -08 levels, and will not reach 2007-08 funding levels + inflation until the year 2021. Despite this limit on revenues, the cost of educating students continues to climb. The cost to educate a student is not frozen at 2007-08 levels + inflation, which means school districts in California will remain severely underfunded into the foreseeable future.  During the economic recession, CUSD was forced to cut $152 million from the District’s Budget (about 32% annually). During that same time, extraordinary measures were taken by CUSD to protect employee compensation from cuts despite the fact that CUSD employee compensation represented over 90% of the Districts budget.

Despite tough economic times and a continued lack of adequate funding from the State of California, CUSD's employees have continued to see Automatic Step & Column Salary increases, COLA Increases, Health and Welfare Benefit Increases. These increases have been paid for with class size increases, deferred maintenance, lost instructional time (furlough days) and cuts to academic programming, The ongoing cuts to student services have resulted in a notable decline in academic performance across all grade levels and all ethnicities as evidenced by CUSD's LCAP and historical data.

The District was forced to implement an early retirement because the ratio of employee salaries, pensions and benefits to revenue exceeded 100% of the Districts total projected revenue.

The State's intentional and ongoing violation of Article XVI, §8 of the California Constitution which requires the State to set aside enough funding to provide every student with equal opportunity for a quality education is a violation of the civil rights of every student in the Capistrano Unified School District.